Skip to content
Making a Change – how cloth nappies can save the world!

Making a Change – how cloth nappies can save the world!

Babies will need an absolutely incredible 5,000 to 7,500 nappies before they are old enough to learn to use the toilet! The cost of all that plastic rubbish can be well over £1,000, and a lot more if you use disposable baby wipes, too!

Washable nappies are therefore a great option if you want to save money. Even if you only use them for one baby they’re cheaper than buying disposables, but if you use them for more than one baby they become a massive saving against disposable nappies. After you’re finished with them there is a strong market for second hand nappies, so you may find you can sell them on and get back a lot of what you paid for them. 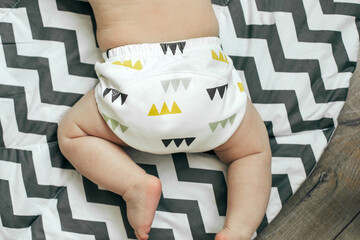 As well as being good for your pocket, washable cloth nappies also help to save the planet from mountains of plastic waste which may take thousands of years to degrade in landfill, not to mention the contamination to the surrounding land from the raw sewage contained in the nappy.

Cloth nappies may feel a bit icky, but they’re actually super easy. With disposable nappies you’d remove the nappy, pop it in the bin and you’re done. With cloth nappies you do the same, only you pop them into a bucket with a lid, instead, then throw the filled bucket into the washing machine as needed. It’s surprisingly simple!

While cloth nappies look complicated to start with, it can help to remember that they are fundamentally all made up of three parts: a waterproof (or water resistant) cover, an absorbent part and a liner. Sometimes these parts are all stitched together, sometimes they are separate, but that’s all there is to it – these three parts. 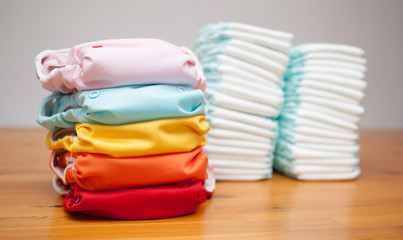 This part of the nappy is very often made of PUL (a plastic coated fabric). This is semi-breathable but still waterproof. You can choose from a wide range of beautiful colours and designs which can become something of an obsession! There are different styles and cuts of this part of the nappy, and some parents find that certain brands work better than others for their baby. The wrap doesn’t need to be changed every time the nappy is changed – only if it’s soiled or smelly.

Outer wraps also come in other fabrics. Wool is quite popular as it’s more breathable than PUL and wonderful for babies who are prone to nappy rash. Wool wraps rarely need washing, but they do need to be lanolised, which means using a special liquid on them to keep them waterproof. Sellers of wool nappy wraps will be able to explain how to care for them.

The absorbent part of a cloth nappy can be made from various fabrics including cotton, bamboo and plastic fabrics such as microfibre. Bamboo is very absorbent and great for the heavy wetter, but it takes longer to dry than other nappy types. Microfibre cloth nappies dry really fast, so are a great option for those without a tumble drier, and they stay really soft when line dried, too.

The absorbent part of the nappy can be made into a nappy shape for ease of use, or sold as a rectangle to fold into three, making a pad. It’s also still possible to buy the old fashioned terry towels which can be fastened with a nappy pin, or a neat little device called a nappi nippa which takes away the risk of a safety pin prick! Both terry towels and the rectangle nappies make fantastic cleaning cloths after your baby is no longer using them for their original use, making them a very eco option. 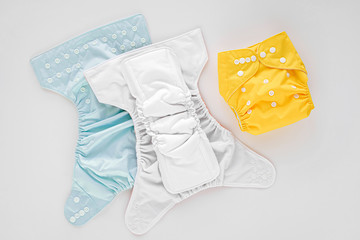 Nappy liners tend to be either paper or fleece. Cloth nappy liners create a barrier between the absorbent part of the nappy and your baby’s skin.

Paper liners capture most of the poo and can be flushed down the toilet, making the washing of the nappies much less hassle.

Fleece liners are washable, and some parents prefer them because they’re softer than the paper option. Formed poo (eg after babies start on solids) can be tipped off them into the toilet, but while poo is still runny the fleece liners just get thrown into the wash as they are, and they wash just fine.

If you’re washing nappies it makes no sense to use throw-away baby wipes which are also made with plastic and are a big problem for landfill! Cloth nappy wipes are a cheap and simple way to reduce your costs and the cost to the planet.

You don’t need anything special. Squares of fleece are perfect. You can buy fleece by the meter in any fabric shop, and it can just be cut into squares a little smaller than a face cloth. You don’t need a fancy cloth wipe solution, just wet the cloth under the tap before use and throw the used wipe into your nappy bucket with the dirty nappy.

Washable cloth nappies can make a huge saving, both financially and environmentally. They are surprisingly easy to use, and can become quite addictive with their beautiful prints and designs! It doesn’t need to be all or nothing, just using some cloth nappies will reduce your environmental footprint so why not give it a go?